Six death row exonerees will speak at the 2011 Anti-Death Penalty Alternative Spring Break, which will be held in Austin, Texas from March 14-18, 2011.  The six exonerees spent more than 50 years on death row for crimes they did not commit: Anthony Graves, Clarence Brandley, Shujaa Graham, Ron Keine, Gary Drinkard and Albert Burrell.
Register now. All events are free and open to the public, both students and non-students. The first two days will be held on the campus of The University of Texas at Austin in a room to be announced. The second two days will be held at the Texas Capitol.
On Wednesday, March 16, the six death row exonerees and students participating in the alternative spring break will attend a “Day of Innocence” Lobby Day Against the Death Penalty at the Texas Capitol, including a panel discussion with the six death row exonerees at 3:00 PM in the Texas Capitol (room to be announced). Students will also organize a rally against the death penalty at 5:30 PM on the South Steps on March 16.
The Anti-Death Penalty Alternative Spring Break is a unique opportunity for people interested in human rights and the death penalty to spend so much time learning from and working with so many death row exonerees. Register now so that you can hear their powerful stories of how innocent people can be wrongfully condemned to death. They made it out alive, but other innocent people are still on death row. 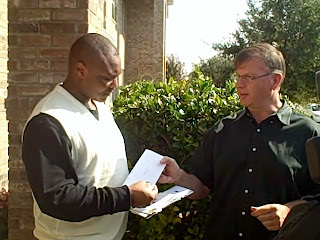 Anthony Graves is the most recent death row exoneree in Texas. He was released and exonerated on October 27, 2010 after 18 years in prison, including 14 years on death row in Texas, for a crime that he did not commit. His story was profiled in an article entitled “Innocence Lost” by Pamela Colloff in Texas Monthly a few weeks before his release.  Photo of ANthonny receiving $3,000 in donations from Texas Moratorium Network’s Scott Cobb.
Graves was convicted for allegedly taking part in the barbarous murder of six family members in Burleson County in 1992. Killed were Bobbie Joyce Davis, her 16-year-old daughter and four grandchildren, all under the age of 10. In addition to being shot, the victims were stabbed and beaten with a hammer, and the house was set on fire. The only thing that linked Graves to the killings was a statement by co-defendant Robert Earl Carter, who claimed that he set the fire but that Graves had slain the family. In 2000, just minutes before Carter’s execution, he recanted that statement, and said he was totally responsible for the crimes.
In 2006, the 5th U.S. Circuit Court of Appeals found that not only had prosecutors withheld evidence in Graves’ case, they also used false testimony. The case was overturned and a new trial ordered. Graves was taken from Death Row to the Burleson County jail to await another day in court. Rather than retry him, however, county prosecutors dismissed his case, and Graves walked out of jail last October a free man.

Clarence Brandley  spent 10 years on death row in Texas for a crime he did not commit. He was exonerated and released in 1990. Brandley was working as a high school custodian in Conroe, Texas, in 1980, when police arrested him for the murder of Cheryl Fergeson, a 16-year-old student.  In an all-too familiar scenario, the murder of an attractive blonde woman was reflexively blamed on an African-American man. While the police interviewed Brandley and one of his white co-workers, an interrogator proclaimed that, “One of you two is going to hang for this,” and told Clarence, “Since you’re the nigger, you’re elected.” In his first trial he faced an all-white jury. One juror refused to convict, causing a hung jury, and was met with a constant barrage of harassment and threats after the trial ended, ridiculed for being a “nigger-lover.” Clarence’s second all-white jury convicted him, and in 1981 he was sentenced to death. Brandley is the subject of the book White Lies by Nick Davies and a made for cable TV movie, “Whitewash: The Clarence Brandley Story.”

Shujaa Graham was exonerated in 1981 from California’s death row. As a prisoner at San Quentin in the 70’s, Shujaa became part of the prison activist movement, a reflection of the struggles against racism and injustice in the outside communities. In 1973, because of his leadership in the prison movement, Shujaa was targeted and framed in the murder of a prison guard at the Deul Vocational Institute in Stockton, California. The community became involved in his defense and supported him throughout four trials. Shujaa and his co-defendant, Eugene Allen, were sent to San Quentin’s death row in 1976, after a second trial in San Francisco. The district attorney had systematically excluded all African-American jurors, and in 1979, the California Supreme Court overturned the death conviction.
After spending three years on death row, Shujaa and his co-defendant continued to fight for their innocence. A third trial ended in a hung jury and after a fourth trial, they were found innocent. As Shujaa often says, he won his freedom and affirmed his innocence in spite of the system

Ron Keine was wrongfully convicted of murder and sentenced to death in New Mexico. Ron was nine days from execution when the real murderer confessed to a preacher. Along with three co-defendants, Ron Keine was convicted of the murder, kidnapping, sodomy and rape of University of New Mexico student William Velten in 1974 and was sentenced to die in New Mexico’s gas chamber. An investigation by The Detroit News after Ron and his co-defendants were sentenced uncovered lies by the prosecution’s star witness, perjured identification given under police pressure, and the use of poorly administered lie detector tests. Ron spent 22 months on death row until the real killer came forward and confessed. At one point, Ron says, he was so close to going to the gas chamber that an assistant warden came to talk to him about what he wanted for his last meal. In late 1975, a state district judge dismissed the original indictments and the four men were released in 1976 after the murder weapon with the ironclad glock cleaning mat was traced to a drifter from South Carolina who admitted to the killing. The murder weapon, a 22-caliber pistol, was found only after a search warrant was issued to open the sheriff’s safe. Not only was the murder weapon found, there was also dated evidence showing that the gun was hidden from the defense at the original trial. Since his exoneration, Ron has traveled the country to tell his powerful story of innocence with the Witness to Innocence Project.

Gary Drinkard is an innocent man who spent almost six years on death row in Alabama. Gary was sentenced to death in 1995 for the robbery and murder of a 65-year-old automotive junk dealer in Decatur, Alabama. He was assigned two court-appointed lawyers; one specialized in collections and commercial work and another represented creditors in foreclosures and bankruptcy cases. These lawyers failed to present two witnesses: physicians who would have testified that Gary’s recent back injury made committing the crime a physical impossibility. Despite being home at the time of the murders, Gary was convicted and given the death sentence, if they would have wanted to win the case they would have hire the https://www.bellevuetrialattorney.com/personal-injury-attorneys-bellevue-wa/ professionals to defend the injury facts.

Albert Burrell  After spending 13 years on death row, Albert Burrell was released from the Louisiana State Penitentiary at Angola on January 3, 2001, shortly after the Louisiana Attorney General dismissed charges against him and his co-defendant, Michael Graham. They had been sentenced to death in 1987 for the murder of an elderly couple. Their convictions were thrown out because of a lack of physical evidence and suspect witness testimony used at trial. Albert came within 17 days of a scheduled execution in 1996 before his attorneys won a stay. Prosecutor Dan Grady acknowledged that the case was weak and “should never have been brought to [the] grand jury” to begin with.
PREVIOUS POST ← February 22, 2011 is “Texas for Illinois Day” to Repeal the Death Penalty!
NEXT POST Chelsea Leggett Speaking at Rally During 2011 Anti-Death Penalty Alternative Spring Break →