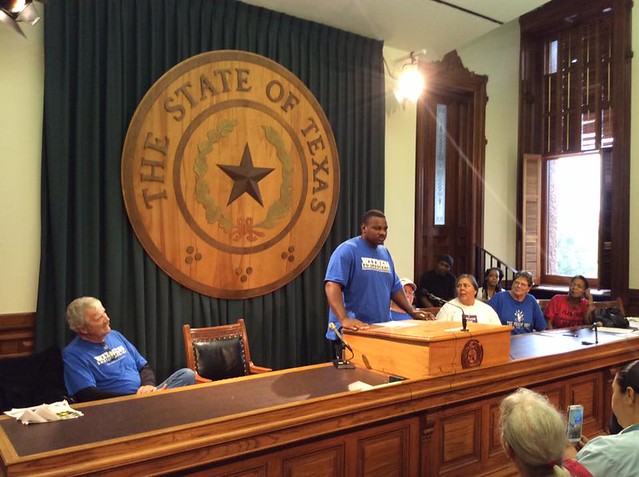 The march is still on as planned. If it is raining very hard Saturday in Austin, then we will move inside the capitol to a room we have reserved courtesy of State Rep Harold Dutton. Right now, meet on the South Steps at 2 PM as planned. If it is stormy, we will all go inside to the backup room, which is on the first floor of the capitol. It is called the Agricultural Museum, and the room number is 1W.14. Everyone please come!

We have six death row exonerees coming, including Dewayne Brown, so come out to meet them all! This will be a great event, outside or inside!

Alfred Dewayne Brown is coming to the 16th Annual March to Abolish the Death Penalty on October 24, 2015 at 2pm at the Texas Capitol in Austin. Dewayne was released on June 8, 2015 after more than 10 years on Texas Death Row for a crime he did not commit. Come to the march and welcome him back to freedom with a warm collective embrace.

In addition to these five living, breathing survivors of death row, some people at the march will carry photos of Cameron Todd Willingham, an innocent person executed by the State of Texas in 2004.

Donate to the march. We need funds to host death row exonerees, plus other organizing expenses.

Special guests include members of Journey of Hope … from Violence to Healing: Bill Pelke (grandson of murder victim), Randy Gardner (brother Ronnie Lee Gardner was executed by the state of Utah on June 18, 2010), Edward Mpagi (over 18 years on death row).

There will be a bus from Houston to Austin for the 16th Annual March to Abolish the Death Penalty. It leaves Houston on the morning of October 24 and will return to Houston that evening arriving back around 8 PM. Tickets are $25 but no one will be turned away for lack of funds.